A tale from the womb 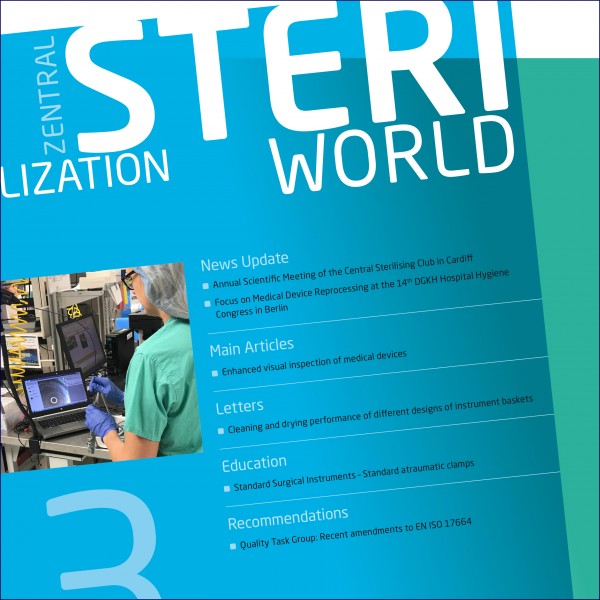 Welcome to issue 3 of Steri World.
We have a good mix of experience reports and conference reviews with an interesting article from Stephen Kovach and colleagues on enhanced visual inspection of medical devices.

When my friendly reminder to write this editorial came from mhp I was engrossed in a documentary on the television. Its was discussing operations on babies within the womb who had signs of spina bifida. Spina bifida is a condition when a baby’s spine and spinal cord don’t develop properly due to a neural tube defect leading to a gap in the spine. The neural tube is the structure that eventually develops into the baby’s brain and spinal cord. The tube starts to form in early pregnancy and closes about four weeks after conception. In such cases part of the neural tube doesn’t develop or close completely, leading to defects in the spinal cord and bones of the spine (vertebrae). The condition is usually detected during the mother’s mid-term scan between 18 and 21 weeks of the pregnancy.

Professor Michael Harrison is widely credited with performing the world’s first open foetal surgery over 37 years ago in California and since then a whole range of in utero procedures have been developed. Foetal surgery for myelomeningocele, the most severe form of spina bifida, has been performed in the United States of America for nearly a decade and whilst there has been a European centre for this surgery in Belgium since 2011, a specialist UK unit has only recently opened. In this procedure the surgeon opens the uterus of the mother and closes the opening in the baby’s back while they are still in the womb.

After watching the documentary (called Spina Bifida & Me and presented by Ruth Madeley, an actress who has spina bifida), I started thinking about the implications of such surgery on the sterilization process. When I say the sterilization process, I don’t mean I had doubts about the physics of the process working but more about our ancillary processes that accompany sterilization such as tracking and traceability and segregation of high-risk instrument sets.

The first question to come to mind was who was the patient? Is it the mother or the unborn child? Who is recorded within the electronic tracking system? As the unborn child will not yet have an NHS number, it would probably have been the mother. But should there be a need for a recall or look back on the instrumentation use, there would possibly be two patients to check on – the mother and the baby! As far as I am aware, even if it was possible to assign some identifier to the unborn child, most theatre management systems or track and trace systems only provide one field for recording the patient ID. If the instrument set used for opening the womb is different to the set used for the procedure on the baby then it would be possible to record them individually but that still assumes you could apply an identifier to the baby – which of course is unlikely to yet have a name (and even if it does, based upon my own family’s experiences, it could be wholly inappropriate or totally different to the one it’s given once born).

The reason why this concerned me is in the second question I asked myself – Is this a high risk procedure from a prion disease perspective? Because if it is (and don’t forget this is a procedure where the foetus has exposed neuro tissue) then surely the requirements of the National Institute for Health and Care Excellence (NICE) guidance 196 applies. The UK guidance’s risk reduction strategy states that separate pools of instruments be used for high-risk tissue surgery, dependent on the patient’s birth date. This differentiates between patients who were either born before 1 January 1997, or who were born on or after 1 January 1997, and requires that separate pools of instruments be used for each stream. Without doubt the baby will be born post January 1997; but what about the mother’s age? Would the surgery require a post 1997 set for the baby or a pre 1997 set for the mother if she herself was born prior to January 1997?

Obviously key to all this is whether the sets used for the procedure on the mother and foetus are separate. That makes the whole thing much simpler as theprocedure to open the mother is unlikely to be high risk and therefore doesn’trequire set segregation. But even then, will the neuro set used on the babycome into contact with the mother and if so, is it then compromised and does it become a pre 1997 set that cannot be used on post 1997 patients?

I may be over-thinking this but it illustrates how developments in surgery caneasily impact upon our working practices in the field of sterilization and thatsometimes we have to pause and consider the implications. I’m due to visit thehospital in the UK within the next few weeks where this procedure is undertaken.I’ll be asking some questions about this surgery. If only to stop my own overactive mind!!

Tags: Steri-World, Editorial
Write a comment
This website uses cookies, which are necessary for the technical operation of the website and are always set. Other cookies, which increase the usability of this website, serve for direct advertising or simplify interaction with other websites and social networks, will only be used with your consent.
Decline Accept all Configure