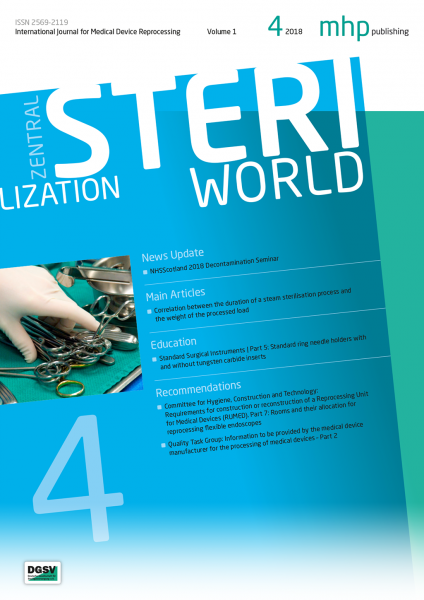 With issue 4 of Steri-World about to land in your smartphones, we move into the autumn and the busy conference season. It seemed to kick off early this year and almost as soon as the school holidays were over, the first of several study days in September were upon me. What was both reassuring and concerning at the same time however was that some themes never change! Should we sterilize all flexible endoscopes? We seem to have been discussing this question for a very long time. I first gave a presentation around this topic in 2012 and some 6 years later we still debate where the to draw the line between those that need to be sterilized, those that should be sterilized and those that don’t need to be. Perhaps because endoscope technology changes so quickly we will always have this discussion. Or maybe the duodenoscope cleaning issues have ignited the debate again.

The session this time was in the form of a debate. Two speakers with 15 minutes each to make their point followed by audience questions and then a vote. The proposal for the debate was that all endoscopes should be sterilized. I was opposing the position. To prepare for the debate required some research and I was surprised to have my own views challenged by some of the facts and figures around endoscope use. One of the pleasures (and challenges) of debating of course is that sometimes you can be asked to present a viewpoint that you don’t necessarily fully agree with. There are those who would never present an opposing position to the one they believe and I fully understand why they may wish to take that approach. But for me there seemed no clear-cut right or wrong answer with this subject.

My first thoughts were not whether all endoscopes should be sterile but whether all endoscopes can be sterile. Larger scopes such as 6 channel colonoscopes cannot reliably be processed through the majority of H2O2 machines. Even those that claim to be able to process endoscopes with a 3 Metre or longer lumen will have limitations regarding combination of channel diameters and channel numbers. Ethylene Oxide (EtO) with its small molecule size can still have penetration problems with the longest of scopes and reliable evidence for its efficacy with new endoscopes is thin on the ground. Studies published by Alfa et al [1] involving inoculation and sterilization of flexible surrogate lumens showed that EtO efficacy is compromised when inorganic contaminants are present. However even if efficacy can be demonstrated for some longer endoscopes with EtO, the turnaround time in the UK is lengthy due to aeration times and the need for off-site sub contract processing. Liquid Peracetic Acid systems have shown efficacy for such scopes but require immediate use of the scope if sterility is to be maintained at the point of use.

The evidence from countries that have implemented sterilization of endoscopes that would normally be considered semi invasive paints a mixed picture. The paper by Snyder et al [2] published in the Journal of Gastroenterology in October 2017 compared single high-level disinfection (sHLD) with double high level (dHLD) disinfection and HLD with EtO sterilization. They found that the dHLD and HLD/ETO arms fared worse than the sHLD arm with regard to proportion of duodenoscopes with >10 CFU microbial growth (their secondary end-point). Their summary did not support the routine use of dHLD or EtO sterilization for duodenoscope reprocessing. In contrast a paper published by Naryzhny et al [3] in the Gastrointestinal Endoscopy journal in 2016 concluded that proper use of high level disinfection alone may not eliminate multidrug resistant organisms from duodenoscopes. In their single centre study, the addition of EtO sterilization and frequent monitoring with cultures reduced duodenoscope contamination. As such, they said, EtO gas sterilization may provide benefit in further decontamination of the duodenoscopes but further investigation is necessary. Obviously, the question needs to be asked as to whether the increased monitoring with cultures played a bigger part than the use of sterilization or vice versa. However, even if we could sterilize all scopes, the use of sterilization comes at a financial cost. There are approximately 3 million endoscopy procedures carried out in endoscopy departments across the UK in 2016 [4]. With costs of a low temperature process being at best £5 per cycle and with the addition of wrap, labour, indicator and energy costs at £3 per cycle, this equates to a bill for the British health service of somewhere in the region of £24 Million. And this is a conservative estimate as many low temperature processes could be significantly higher than £5 per cycle. All this extra expenditure in a year when the NHS in the UK is expected to save £150 Million. On top of this would be additional costs for the extra endoscopes required to facilitate a longer turnaround in the process. A hydrogen peroxide cycle would likely add an hour onto the process (including wrapping, inspection and product release) whilst EtO could add days due transport and aeration requirements.    When looking at papers published over the last few years detailing endoscopy infections, outbreaks and pseudo-outbreaks, it seems that most of these occur in a limited range of endoscope types. On reviewing these papers my own figures estimate that 75% of issues occur in duodenoscopes and bronchoscopes.

Yet according to Shenbagaraj’s figures in the national survey [4] these account for only 3% of procedures through endoscopy departments. To implement sterilization of these endoscopes would cost a much more reasonable £1M excluding capital costs for additional sterilizers and endoscopes. In terms of risk versus cost it seems a much better balance.

Tags: Editorial
Write a comment
This website uses cookies, which are necessary for the technical operation of the website and are always set. Other cookies, which increase the usability of this website, serve for direct advertising or simplify interaction with other websites and social networks, will only be used with your consent.
Decline Accept all Configure