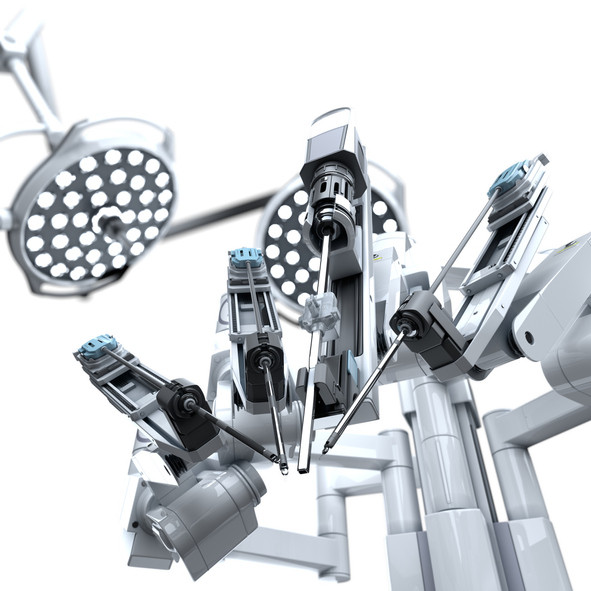 Robotics – the surgery of the future?

In the first session was entirely dedicated to robotics. Kyle Miller from Intuitive Surgical spoke about the intelligent future of surgery. The number of surgical procedures carried out was amazing: over a million procedures had been performed worldwide in 2018. Miller explained that there was a sharp rise in the number of minimally invasive procedures. What role did robotics play here? Well over 5,000 DaVinci systems were already in use throughout the world. But patients were not all the same, e.g. in the USA there were increased obesity rates, imposing different preconditions.

Miller explained that robot-assisted surgery paved the way for procedures which were not feasible with conventional surgical techniques. Besides, simulation had in the meantime improved to such an extent as to really mimic reality – that was very beneficial for preoperative management. Miller compared surgeons with professional athletes who also had to meticulously prepare for competitive sporting events. Intelligent systems and a human understanding of them were a prerequisite for further development.

Mark Slack from CMR Surgical spoke about the advent of a new surgical device. Slack had until recently been head of the Gynaecology and Urogynaecology Department at Cambridge University. He gave a number of historic examples of medical “achievements” – many of which proved not to be functional. Such errors as well as surgical mistakes and surgical site infections (SSIs) contributed to the injury or death of huge numbers of patients.

By contrast, evidence-based medicine could save lives. As one example where evidence was disregarded, Slack cited the Challenger catastrophe – but it was not possible to outsmart nature, as demonstrated by Slack based on a number of witty examples.

Contrary to the assumption of surgeons, it was not just a matter of procuring the robots. Campbell explained the extensive collaboration needed – with manufacturers, the competent authorities, external laboratories, etc. – to put in place a validated reprocessing/decontamination process as a precondition for being at all able to use robotic systems. In the specific case cited, that led to a delay of almost three months. The speaker finished by pointing out that the deployment of this futuristic technology was associated with a steep learning curve and that the reprocessing steps had to be defined and the necessary equipment ordered at the same time as the robotic systems because one could not begin to conduct surgery before the reprocessing processes had been validated.

But the AE-Ds were not responsible for certain tasks, e.g. for compilation of the IFU. Nor could they confirm the accuracy of the latter – that was the manufacturer’s task. And it was the Economic Operator who ultimately had to decide whether a device was ready to use.

Armed with photos, Spencer demonstrated the reprocessing challenges and advocated that in certain cases the AE-Ds should inform the manufacturers and the respective hospitals that their reprocessing processes were not adequate.

Suitable equipment was also important – in that respect Intuitive Surgical had clear guidelines on the special equipment and cycles to be used. “Similar” did not necessarily mean sufficiently equivalent here.

Dr Arman Motesharei from Stryker reported on the use of robotics in orthopaedic surgery. Robotics had been introduced already early on, e.g. for certain neurosurgical procedures.

In orthopaedic surgery, for example, robotics helped to reduce postoperative pain. Looking ahead to the future, Motesharei said that the hardware was already well developed. Hence, progress was most likely expected in the software setting, e.g. for optimization of surgical procedure sequences. Management of the entire operation from the preoperative diagnosis through planning and conduct of surgery to the postoperative outcome generated data, which in the future could be used for surgical planning. That would help develop much more standardized procedures.

Another goal was to further reduce the number of instruments so as to eventually achieve something akin to “surgery out of a box”. At present, the predicted sizes of e.g. implants continued to be an obstacle.

Doros Polydorou spoke about the bigger picture – expectations vs reality with regard to robotic surgery. He showed videos from the early period of robot-assisted surgery in the 1980s with e.g. voice-operated instrumentation or coagulation.

Polydorou listed the areas where overall investments were needed to establish robotic surgery. These ranged from procurement through reprocessing to staff training. Conformity problems could also arise, in particular in the case of IFUs from, for example, the USA which did not concord with European provisions.

Polydorou stated that the IDSc had an important role here in driving forward standardization and training.

Further growth was expected in this sector in the future. Cooperation between the manufacturers and reprocessing community would be all the more important. In the end, instruments had to be available in an impeccable state at the right time and at the right place to assure patient safety.

ePaper Subscription
ePaper Central Service
€92.80 *
Huys
Sterilization of Medical Supplies by Steam
€32.80 *
STERI WOLRD Issue 01/2018
STERI WORLD 01/2018
€12.00 *
STERI WORLD Special Report
STERI WORLD Special Report 2019
€6.99 *
This website uses cookies, which are necessary for the technical operation of the website and are always set. Other cookies, which increase the usability of this website, serve for direct advertising or simplify interaction with other websites and social networks, will only be used with your consent.
Decline Accept all Configure