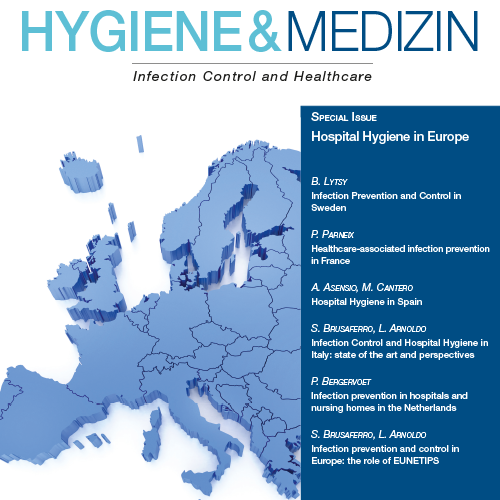 Infection prevention in Europe – EUNETIPS is celebrating its birthday

In autumn 2018, EUNETIPS (European Network to Promote Infection Prevention for Patient Safety) will celebrate the 10th anniversary of its foundation. This celebration will take place in early December 2018 in its founding city, Berlin. The Network was set up at the initiative of the German Society of Hospital Hygiene (DGKH) which had invited the national hospital hygiene specialist societies to Berlin.
Today, there are 30 specialist societies from 21 countries in the Network and they meet twice yearly. Silvio Brusaferro, the Network coordinator, gives an overview of its history and future plans in this issue of the journal.
This special edition also features reports on Italy, Spain, Netherlands, France and Sweden. Since the scope of the journal is limited, only a selection of countries could be featured. Therefore, interesting countries such as the United Kingdom (UK) or smaller countries such as Croatia or Greece are missing. The authors were proposed by the journal to focus on certain topics. Some did so, while others tended to give a chronological account of proceedings. This demonstrates that developments and the current situation can vary greatly between countries.
If one takes a look at the Europe-wide ECDC Hospital Prevalence Study from 2011/2012 (ECDC 2013) (2016 not yet published) only for the countries in this issue and additionally UK (England) and Greece, the following picture emerges:

Even if one accepts that perhaps not all surveys are absolutely valid, one has to acknowledge that the data for Germany are not at all that bad – at least compared with other countries. But there is, of course, also room for improvement where the German data are concerned. Five percent of healthcare-associated infections in almost 20 million inpatients per year still mean that one million patients are affected. And quite a few of them are discharged from hospital with permanent disabilities or may even die. While, at 24 percent, the antibiotic prescription rate in German hospitals is, comparatively, relatively low, one must ask: Does one-quarter of patients – five million per year in the hospital setting alone – really need an antibiotic?
Some countries have almost twofold higher infection rates than Germany and, in some cases, more than double the antibiotic use rates. Broadly speaking, these are also the countries reporting very high rates of antibiotic resistant bacteria.
Driven essentially by the EUNETIPS Network, various research projects have been conducted in recent years, in particular the project on the current state of continuing education and training in various countries for hygiene/infection control (TRICE) (Brusaferro et al. 2014, 2015). Thanks to that, it was possible to draw up a list of the most important competencies to be imparted. Early on, some country representatives in EUNETIPS had by all means reservations since they feared they could be “bamboozled”. In the meantime, members know each other and have fostered an open, friendly and target-oriented environment. Many national IPC societies host EUNETIPS symposia at their national congresses, as did the DGKH in recent years.
The articles in this special edition portray very different hospital hygiene situations in various European countries, including differences arising from historic developments. There are also clear differences with regard to how the topic of healthcare-associated infections is to be addressed at present. We Germans can learn a number of things from other countries, but other countries, too, can learn from Germany, especially with regard to the legal and human resources principles.

I hope you enjoy reading these articles.

Write a comment
This website uses cookies, which are necessary for the technical operation of the website and are always set. Other cookies, which increase the usability of this website, serve for direct advertising or simplify interaction with other websites and social networks, will only be used with your consent.
Decline Accept all Configure