World Sterilization Congress in the Netherlands 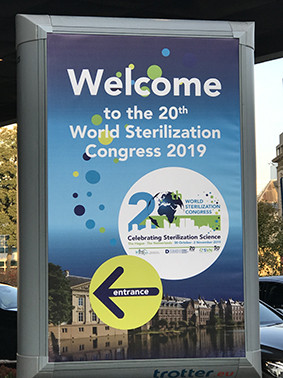 World Sterilization Congress in the Netherlands
Organized by WFHSS, DSMH and SVN in The Hague, 30 October to 2 November 2019
Gudrun Westermann

At the World Forum Congress Centre in The Hague the focus over those days was on medical device reprocessing – over 1,800 delegates from around the world had turned up to attend the World Congress. The two Dutch specialist societies, SVN and DSMH, had organized the congress in collaboration with the World Federation for Hospital Sterilization Sciences (WFHSS) and welcomed guests from all corners of the globe on the first evening with a colourful programme and Dutch specialities.

Endoscopy – not as safe as thought
The next day Margareet Vos opened the scientific congress programme with a talk on contaminated endoscopes. She demonstrated the problems associated with certain designs that did not permit effective reprocessing and resulted in persistent contamination.
Vos pointed out that there were hardly any data available on the contamination of endoscopes. There was widespread divergence in the data reported in the literature, including in relation to the definition of “contaminated”– different colony-forming unit (cfu) counts were accepted in the various studies.
Vos concluded by stating that the findings were worrying – infections occurred because of contaminated endoscopes and patients should be informed about the risks. Her recommendation to the audience was that when positive results were noted the relevant endoscopes should be checked more often to identify a trend.

Patients should be informed about the risks.
One possible way to improve endoscope cleanliness is to inspect the channels with an endoscope. That was the topic of a talk by Mary Ann Drosnock, USA. Drosnock described the current regulatory provisions in the USA. These were only binding if an establishment committed to comply with a particular standard. Inspection backed up by certain aids was recommended, e.g. with a magnifying lamp, light sources or even a borescope – but that was not obligatory.