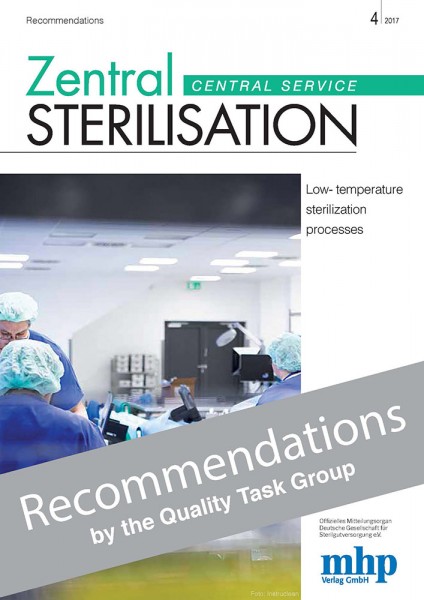 1 Introduction
For medical device (MD) reprocessing there are various processes that must be taken into account. The continuous, rapid pace of developments in medical technology is driving the introduction of ever more complex systems and medical devices, which in turn make increasingly more stringent demands on reprocessing. For example, there is a sharp rise in the number of ➜ THERMOLABILE (heat-sensitive) MDs, such as flexible endoscopes, camera heads, ultrasonic transducers and electronic sensors, which can only be sterilized with low-temperature processes.
Even the preceding cleaning and disinfection steps are carried out at lower temperatures for the material compatibility reasons mentioned. Instead of the normally used thermal disinfection (e.g. A0 3000 – at around 90 °C), chemothermal disinfection (addition of a disinfectant) is employed at temperatures of generally less than 60 °C.
Likewise, instead of the generally more popular steam sterilization process at temperatures of 134 °C, for sterilization of heat-sensitive medical devices low-temperature sterilization at much lower temperatures (e.g. 50 – 70 °C) is used.
In the medical setting in Germany, Austria and Switzerland the following ➜ LOWTEMPERATURE
PROCESSES are employed:
–– Hydrogen peroxide sterilization with and without a plasma phase
–– Low-temperature steam and formaldehyde sterilization (LTSF)
–– Ethylene oxide sterilization
–– Gamma irradiation (industrial production)
If necessary, prionicidal activity must be taken into consideration. The KRINKO/BfArM Recommendation* 2012, Annex 7, sets out measures to curtail the risk of transmission of CJD/vCJD via medical devices.
Other factors, e.g. cycle times, chamber volume, sterilization temperature, running costs (such as maintenance and validation) and energy costs, should be taken into account at the time of procurement.

Tags: quality task group, sterilization
Write a comment
This website uses cookies, which are necessary for the technical operation of the website and are always set. Other cookies, which increase the usability of this website, serve for direct advertising or simplify interaction with other websites and social networks, will only be used with your consent.
Decline Accept all Configure